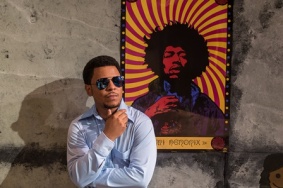 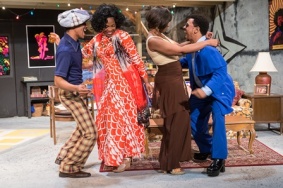 To Get Down on a Righteous Pair of Tickets Click Here!
Dominique Morisseau’s play Detroit ’67 takes place during an intense time in our national and even world history. There was the Vietnam War, nuclear threats, the assassination of President Kennedy, the fight for the Voting Rights Act, and the onward push of the civil rights movement with young leaders at the helm.

Juxtaposed to these signs of the times were the chart-topping Motown hits; songs that fell upon the ears and hearts of youth and gave voice to their dreams and passions. What was it like to be young in the 60’s?

“Empowered, Emboldened, and Revolutionary” are words one Ensemble Theatre patron uses to describe his experience as a youth in Detroit during the riots.

While the play takes place specifically during the Detroit 1967 riots, it focuses on Lank and Michelle “Chelle,” a brother and sister trying to run a business together amidst the heated eruption of violence in their city; young entrepreneurs running an after-hours club in the basement of their deceased parent’s home. Fears for their future are being spurred by all the turmoil, and intersecting with their desire to be young and carefree.

Parallels between the 1960s and present time can be seen with the mounting tension and frustration between civilians and authority figures; and youth led activism such as the Black Lives Matter movement.  A new generation emerges and asserts themselves against inequalities and begins their endeavors to affect change.

Today’s technology allows youth to mobilize quickly with the use of social media. They can develop and run a campaign or movement from computers and mobile devices as seen in recent political and fundraising campaigns, and movements for social change on a global scale.

“Most of the movements of our day were led by youth,” says the Detroit native. “In many instances the parents were supporting them because in their day they knew they likely wouldn’t have had the numbers to make the impact we were making.” 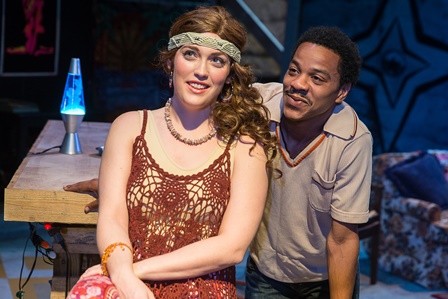 The lives of youth in any generation appear to be ever layered with the complexity of seeking justice and social changes towards issues of the day, with the simplicities  of good music, romance, and deciding what dreams to follow first.

We’re about to dim the lights and get ready for this psychedelic basement party in Detroit ’67. To Get Down on a Righteous Pair of Tickets Click Here!

Have you ever been to Paris? Can you tell us what epiphanic lessons you learned there?

What I Learned In Paris finds a group of adults enthralled in what some would consider quite inappropriate and trivial behavior since their on the ebb of one of the major historically significant political achievements of the 1970’s. C’est la vie mon chéri. No matter what gravely important changes or monumental successes hang in our backdrop, it doesn’t stop life’s little nuances from occurring. “The heart wants what the heart wants.”

The story takes some far out psychedelic twists when a divorcee, back in the ATL fresh from her trip to Paris and full of new age wisdom, has a few liberating lessons for the love torn bunch. Director Eileen J. Morris has put together a powerhouse of talent to bring every dimension of Pearl Cleage’s romantic comedy to life.

Featured cast members include: Yunina Barbour-Payne, making her debut on The Ensemble Theatre stage; Kendrick “KayB” Bown, just seen in Fly; Cynthia Brown Garcia, who was in The Ensemble’s premiere of the Thomas Meloncon play Christmas with Great Aunt; Detria Ward, who won the 2013 Houston Press Best Actress for her performance in The Ensemble’s production of Pearl Cleage’s The Nacirema Society; and Mirron Willis, who most recently performed as Malcolm X in The Meeting.

There is perhaps no issue more hotly debated in the history of the church than that of women serving as leaders and pastors.
The Ensemble Theatre tackles the debate in its 2014-2015 season opener, Women in the Pit,  by Joyce Sylvester and Directed by Eileen J. Morris. At Mount Zion Baptist Church two deacons and two elders are told to find a new pastor and quickly become at odds with one another when it’s clear the most qualified candidate is a woman.

Many opponents of female clergy and as church leaders cite I Timothy 2:12 as their biblical reference. The scripture says “and I do not permit a woman to teach or to have authority over a man, but to be in silence. (NKJV)”
Ministers have long taught that scriptures should be studied in context with the time period they were written. Societal norms at the time, such as women not receiving the same education as men, being silent in church and covering their heads, should be taken into consideration.
“I think all of those things have merit and that all things in the scripture are for our benefit,” said Rev. Jan Courtney Stephens, associate pastor of Christian Education at New Faith Church.
“However, I think we need to understand that some things should be assessed in context and ask ‘what was God saying at that time.”

Stephens theorizes that when the Apostle Paul wrote I Timothy, a letter to the pastor at the church in Ephesus, he may have noticed the Greek women were being loud, interruptive and even ostentatious while in worship services.
“I think much of that is just being taken literally opposed to in the context of what was happening in the culture,” she said. “Women really could be stoned for not obeying their husbands.”
“A person’s cultural experience informs them tremendously,” said Rev. Lekesha Barnett, minister of young adults and singles at Wheeler Avenue Baptist Church. “My interpretation, based on what I believe to be true to the context and the cultural experience, is that women did not have the same benefit of education as men so they were less equipped to be teachers. You would not want someone who is not informed to teach.”
Barnett also noted I Corinthians where the Apostle Paul writes “let your women keep silent” but in the same letter he also writes “if she prophecies let her prophecy with her head covered.”
“When we get through all the layers of how one can understand those texts it’s still going to come down to the fact that there are still people who are going to believe what they are going to believe and stand where they stand because of their own biases, faith perspectives, traditions and comfort,” she continued.
Church leadership titles are not gender specific, according to Barnett and Stephens. Therefore, they cannot be solely designated to men.
“The word ‘pastor’ means to shepherd, to guide, to nurture,” Barnett said. “To pastor means you’re feeding, teaching, leading and guiding people. All of those things are something a woman can do.”

“Bishop means to oversee, as one who takes charge,” Stephens said. “If I am able to take that just by itself and go back to the way God used Deborah (a prophetess and judge) and Huldah (a temple prophet), I say it can be very possible.”
When reading the Bible in totality, it is evident that God has used some out of the ordinary people and those deemed of lesser significance to accomplish His will. And although there are those who do not agree with women in church leadership, it should be evident to every Bible believer that women have played an active role in doing God’s work.
“When you bring all scripture together it is clear that God will use whom he chooses and there is evidence of that in the Old Testament and the New Testament,” Stephens said. “It is evident that God has used women, not only to teach women but to judge and administrate even in the affairs of men.”
Barnett echoed Stephen’s sentiments.
“Where God calls and equips, He will sustain and provide the space and the opportunity for that which He has placed in a person to do and to benefit the Body of Christ,” she said.

Events that Enlighten, Entertain, and Enrich